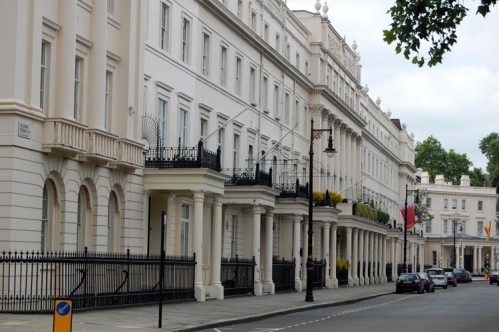 Step into this corner of London and you’ll be mingling with the elite. The entire area is designed to impress and offers a wealth of exciting outings for visitors. For those who love to indulge in heavenly food, exquisite shopping and breath-taking modern architecture, you’ll feel right at home.

Mayfair is an upmarket neighbourhood situated between Green Park and Hyde Park, mere minutes from Oxford Street and Regent Street. And Belgravia is positioned immediately west of Green Park around Belgrave Square which is home to several international embassies.

Anyone lucky enough to spend their London stay in this exclusive neighbourhood will be the envy of many.

What to do in the evenings

A stay in or near Belgravia and Mayfair isn’t complete without sampling some Michelin-starred delights: the area holds an impressive nine stars in its environs. Head to Motcomb Street and try Amaya’s seriously tempting menu, all served up in a cheerful and welcoming atmosphere.

Or if you fancy some traditional English fare – with a high-class touch – head to the fashionable Pantechnicon Rooms.

A note though: wherever you choose to dine in this popular area, reservations are always a good idea.

After dinner, sample some astonishingly good wines at Fino’s Wine Cellar on Mount Street, the sister bar of Fino’s Italian Bistro (equally impressive). Or if you’re after a traditional English pub, try The Audley, also on Mount Street. They keep some delicious cask ales and the pub is much-loved by locals.

Mayfair and Belgravia certainly have some of the hottest nightspots in London with the prestigious Mahiki, Annabel’s and Movida in the area. A night in any of these clubs is bound to be unforgettable, but be sure to don your finest attire as they have stringent dress codes. Some clubs also require membership so it’s best to call in advance.

What to do at the weekend

Start your Saturday the right way with a breakfast or brunch at the Mount Street Deli, a popular choice with Londoners for its delicious creations. You can even take away some extra indulgences to enjoy in the comfort of your accommodation at lunchtime.

When you’re charged up, the best way to spend a weekend in Mayfair and Belgravia is simply ambling around the squares and admiring the architecture – especially in fine weather. You’ll also find some high-end spas and salons locally, so be sure to put some time aside for pampering.

Shopping is another beloved past time in the area with a host of high-end designer boutiques to be explored. Check out the offerings of Christian Louboutin, Balenciaga and Lanvin in the streets of Mayfair or peruse some fine examples of British art and antiques along Pimlico Road in Belgravia.

From this pocket of London, there aren’t many central locations that you can’t reach within 30 minutes. Buses also run frequently in and out of the area, some serving well into the early hours.

The City: A Visitor's Guide